Nickelodeon invites kids to join Dora and Boots on an exciting aquatic adventure in the brand-new DVD, Dora the Explorer: Dora’s Rescue in Mermaid Kingdom, featuring Latina superstar Thalia as the voice of a mermaid. The DVD features the title episode and additional episodes from Dora the Explorer’s current seventh season. 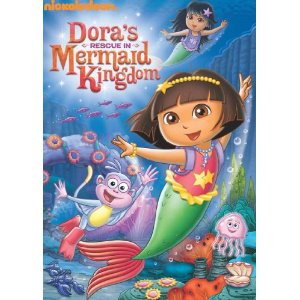 Dora’s Rescue in Mermaid Kingdom: Dora and Boots are at the beach when they find Maribel, a little lost mermaid, who needs to get back to her mommy (voiced by Thalia) in the Mermaid Kingdom. Dora uses her mermaid charm necklace to transform into a mermaid and turn Boots into a sea monkey. Together the three set off on an underwater adventure through the octopus’s garden, past the ocean rocks to Mermaid Cove where Maribel will have to sing to bring all the mermaids together so she can find her mommy.

Benny the Castaway: Dora and Boots are getting ready to have a beach picnic with all of their friends when suddenly a bottle rolls in with a wave. Inside the bottle, Dora and Boots find a note from Benny. His balloon ran out of air on the way to the picnic and he’s stuck on Coconut Island. It’s Dora and Boots to the rescue!

Dora’s Moonlight Adventure: Dora’s taking care of Abuela’s three kitties: Pico, Mónica and Lucky. At Dora’s house, Mami reads Dora and the kitties a story and they all cuddle around their ball of string and fall asleep. When the ball of string rolls out the window and Lucky chases after it, the kitties wake Dora up so she can help find Lucky.

Ever since this DVD arrived at our house it has been on loop. The rain storms the past week have helped with this.  My daughter, Jill, is obsessed with mermaids right now so this DVD is right up her alley.  The movie itself is adorable and I love that, like with all Dora shows, the kids can get involved in each episode.

VeggieTales: The Little House that Stood!