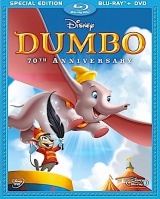 Dumbo was one of my favorite movies growing up. Now it’s one of my daughter, Jill’s, favorite movies.  Dumbo was just re-released on Tuesday with the 70th Anniversary Edition. This is the first time the movie has been released in high definition, as a 2-Disc Blu-Ray Combo Pack, DVD and Movie Download.

Dumbo was originally released in 1941 and it was the fourth animated film from Walt Disney.  In order to restore the movie to its original condition, the Walt Disney Studios Restoration Team turned to the US Library of Congress who store the original 70 year old nitrate camera negative in their film vault, and for reference, to an original 1941 ‘release’ print, help by the Academy of Motion Picture Arts and Sciences. Using this rare nitrate “dye-transfer” Technicolor print for color reference, the team was able to restore Dumbo to the color settings most likely approved by Walt Disney himself.  You have to admit, that is pretty awesome.

The Blu-Ray DVD Combo pack includes a deleted scene, a deleted song, two animated shorts, and other great extras. For me, this is the ultimate Disney movie. The story of Dumbo is so sweet, loveable and inspirational. Plus, how can you forget the music, which by the way won an Academy Award.

Dumbo the 70th Anniversary Edition is available now in stores, so hurry and get your copy before it goes back into the vault and you find yourself paying $100 on eBay or Amazon.

What do you love about Dumbo?

The Adventures of Chuck & Friends: Friends to the Finish

How to Get Help if you have Postpartum Depression