With the Mexican Celebration El Dia de los Muertos (the Day of the Dead), quickly approaching on November 1st and 2nd, Disney Studios wanted to send out this amazing Kermit the Frog coloring sheet on behalf of THE MUPPETS! This is a fun activity to do with kids of all ages. If you click on the photo it will open in a separate location and you can print from there. 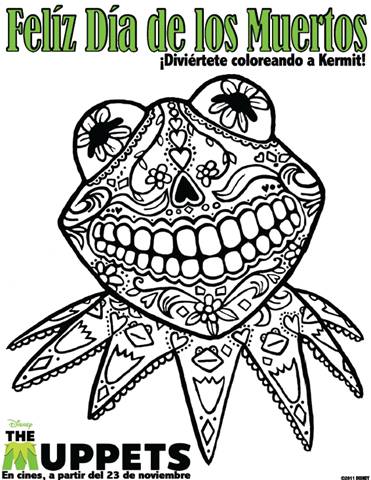 El Dia de los Muertos (the Day of the Dead), a Mexican celebration, is a day to celebrate, remember and prepare special foods in honor of those who have departed. On this day in Mexico, the streets near the cemeteries are filled with decorations of papel picado , flowers, candy calaveras (skeletons and skulls), and parades.

It is believed that the spirit of the dead visit their families on October 31 and leave on November 2.

In order to celebrate, the families make altars and place ofrendas (offerings) of food such as pan de muertos baked in shapes of skulls and figures, candles, incense, yellow marigolds known as cempazuchitl (also spelled zempasuchil) and most importantly a photo of the departed soul is placed on the altar.

Death is laughed at in its face. Many euphemisms are used for death, La calaca (the skeleton), la pelona (“baldy”), la flaca (“skinny”), and la huesada (“bony”). There are refranes, sayings, and poems that are popular with day of the dead. These sayings are cliches and lose meaning when translated. For example “La muerte es flaca y no puede conmigo” means “Death is skinny/weak and she can’t carry me.” Calaveras (skulls) are decorated with bright colors with the name of the departed inscribed on the head. Children carrying yellow marigolds enjoy the processions to the cemetery. At the cemetery, music is played and dances are made to honor the spirits.

Do you celebrate El Dia de los Muertos? Let us know your family traditions in the comment section!

How to have a baby shower on bed rest

Why An Anthology On Multiples Is Long Overdue