Today we are glad to present a guest post by Sarah, of The Great Umbrella Heist!

Seeing as you are reading this, I suspect that you most likely have a set of multiples running around your house. And we all know what that means – you receive unsolicited comments every time you step outside your front door. I was unaware of this phenomenon having spent little to no time on the internet during my pregnancy with my triplet girls. Two of my girls were released from the hospital with me four days after their birth. My parents were there to assist and as our convoy rolled out of the elevator onto the main floor of the hospital, we received a barrage of obligatory newborn comments. You should have seen their faces when I said, “Number 3 is upstairs.” I had no idea that this was just the beginning.

I thought it would be entertaining to recap some of the funny comments we’ve received over the past two years with our triplets. We live in Massachusetts and I’ve been told by my acquaintances and co-workers, who have lived in other states, that we aren’t the friendliest of folks. I have to be honest with you – I don’t think we’ve received any negative or rude comments. Well, there was this one manly man who tried to say something mean. I was shopping alone with Allie at Target and his wife, who was with their singleton, asked how old she was. I added in that Allie was a triplet as an explanation for her small size. They ended up in line behind me where Wife promptly told Husband (aka Manly Man) that Allie was a triplet. “Can you imagine having three?” He mumbled something along the lines of being happy he didn’t have triplets. I suppose he had to prove his manly manliness to the lowly triplet momma.My husband and I both agree that our favorite comment was from the stranger at the Halloween walk who asked us if the girls were really triplets or just dressed the same to be triplets for Halloween. I didn’t quite know how to respond to that one at first.And then there was the pre-teen this past weekend, who kept saying, “But they look exactly the same,” after her mother asked if my girls were triplets.

Another favorite comment came from a neighborhood kid who asked if the girls were twins.When we told him that they were triplets, he responded, “Really? Cuz they sure do look like twins.” Last summer, my mom and I were shopping at Old Navy with the three girls. We were bombarded with questions and ended up chatting with a mom of a baby the same age as the girls. Ironically, her baby wasn’t with her but her pre-teen daughter was. The daughter, obviously having had assisted her mom with her baby sister, was in awe of three babies the same age. She asked me, “What do you do if all three are crying at once?” I responded, “Well, someone just has to cry for a bit.”

Apparently my mother and I look young for our age and there is sometimes a bit of confusion when we are out with the girls as to who is actually their mother. Strangers will look at me and then my mom and hesitantly ask, “Are they yours?” My mom is almost 60 years old!!! When the girls were newborns, I had a sweet grandmother-type strike up a conversation with me at the mall while my mom waited in line to buy subs for a late lunch. The girls were sleeping and I was hoping to inhale my sandwich before having to make another bottle. At the end of the conversation, the woman admitted that at first, she had thought that I was the girls’ big sister helping out but then, when she found out that I was their mother, she became all concerned because she thought I was 19 years old. I thanked her for the compliment and told her to add another 15 years onto that age. Be forewarned if you have yet to wander about with your Choo Choo Wagon. Rich, my husband, refuses to use it at stores because it attracts too much attention. People are constantly asking us where we purchased it and if we had to special order it. I used to tell them that they too could own a Choo Choo Wagon after a quick visit to Step 2’s website. I don’t have the heart (or the time) to them that the wagons are no longer being produced.

I’ll end this post with my personal favorite – when women look at my stomach and say, “You sure look good for having had triplets.” 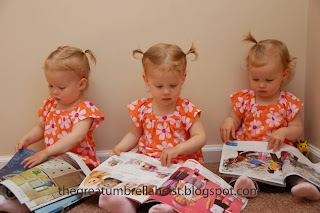 Top 10 Funny Reasons I Should Be Excused from Jury Duty

How to Keep Your Children Safe Through Organization