This week’s guest post was written by Kristen, of Ladybug Blessings. Kristen is not a mom of multiples.. she is a multiple! 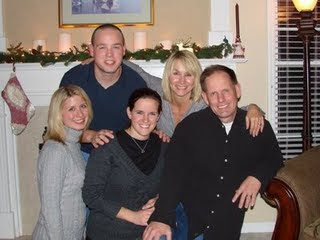 Being a triplet is really one of those things in life that you cannot always describe. People are always asking, “what is it like being a triplet?” and honestly I don’t have an answer. I have nothing to compare it to and they have nothing to go off of. In my opinion triplets are just like having a family with three children besides the fact they are the same age. They still fight, get along, love each other, etc. Although, triplets learn to share at a much younger age and have a bond that other siblings may not have due to their age being the same. As I get older, I think the differences that exist between three siblings of different ages and triplets gets smaller.

Growing up one of the most difficult things about being a triplet was always being referred to as “the triplets.” There were many, many times when I just wanted to point out that while we were triplets, we have always been three completely different people. We are about as different as three siblings can get within the same family. My sister (baby A) is currently in graduate school for Physical Therapy. She loves all sciences, loves dissecting etc. Me (baby C)? I throw up at the site of blood and can barely get a shot without a problem. I am currently in school for education and being a teacher is my dream. I have spent a great deal of time since high school babysitting children from church and in my neighborhood. My sister? She would rather watch children from a distance or see them for a short period at a time. My brother (baby B) graduated with a degree in Political Science and will basically have debates with you about current events, the economy, the government and random history facts. Definitely not my cup of tea. It amazes most people that three children who shared eight months together in a very tight space can be so different but it’s true. One thing that has always been important to my parents is letting us work towards our passions and encouraging us to succeed.

It is really important for triplets to see themselves as an individuals and not always as a group. This is important from birth onward so that the triplets can learn to interact outside of their “club.” Our parents always made sure we were in different classes if possible so that we would make our own group of friends and learn to not always rely on each other. I think this helped us to be independent and prepared us for the times when we couldn’t be together.

I think one of the funniest things about being a triplet is that our personalities are very distinctly A,B,C and how we were in the womb. You may read this and think I am crazy, but my mom says it as much now as she did when we were little. In the womb my brother (B) was right in the middle with my sister (A) off to his left. She was pulled out first because she was breech and had the cord wrapped around her neck. Little me (C) was shoved over on the right side and my mom couldn’t put her arm down for months because that is where I was. She says I came out fighting for attention (due to being shoved out of the way) and have not stopped since. As much as I hate to admit it I think she is right. I am much more outgoing than my siblings and could basically talk to a wall. I have been this way since I could talk (a little late at 2.5 but it hasn’t slowed me down at all!). My brother took control in the womb and still likes to think he is in control today while my sister just takes a laid back whatever goes approach.

Even though triplets and other multiples are more common now whenever I meet someone they almost always say, “I have never met a triplet before!” I sometimes forget that what is so common and second nature to me is still a shock to a lot of people.

Communicating with Children on Tough Topics