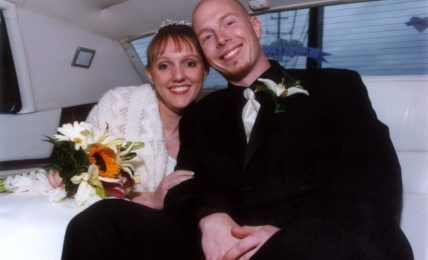 When Amanda put out a post stating she was looking for stories on how we met our valentine, I almost didn’t respond. Not because it wasn’t a good story, but because when I met mine, it wasn’t love at first sight. 😉 Rather it was wow, he’s cute, but kind of annoying!

I had just graduated college and was living at home, waiting for grad school to start in the fall. One of my friends, G, said he had the perfect guy for me. Keith and I went out one hot July night. Keith had a fire-red mohawk and tattoos. I was thrilled; my father was not. We hung out that night, but there was no chemistry to speak of, no spark. Or so I thought. G headed off to the army a few days later, and Keith, who said he’d call, never did. I didn’t put much thought into it, assuming it wasn’t meant to be.

The following summer, G was home on leave. He called up my sister and I to see if we wanted to go to the local drive-in movies. He mentioned that Keith was coming, and I remember thinking, Oh no! Not that guy again!

What a difference a year makes! We sat in the bed of Keith’s truck and talked through both movies (Shrek and Evolution). It was like love at “second sight”! The next night, we went out, just the two of us. We headed to the river walk, a local hangout, where you basically walk around the river area. He drove me home, and before I got out of the truck, he kissed me good night. There it was! The spark!

The first time he gave me flowers, it was sunflowers, just like Shrek gave Fiona in the movie. And he proposed two years later, during the fireworks display at a baseball game.

Tips for Selecting A Quality Diaper Bag for Twins