The featured blogger this week is Kimber of Kimber’s Navy Family! Kimber is the proud MoM of 4 year old D and almost 16 month old twins, C and O.  Not only is Kimber juggling life as a mom of multiples, but she’s also a military wife! I hope you like her and her blog as much I do! 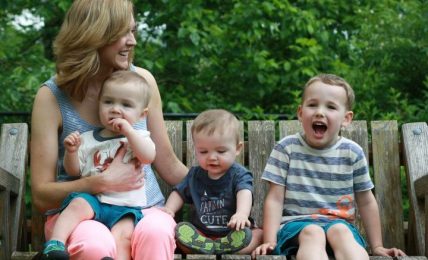 What made you decide to start a blog?

I look at blogging as a way to hone my writing. It has also given me an outlet for discussing the challenges that come with raising children (especially twins!), being married to the military, and life, in general. Blogging has provided a surprising sense of community. I love writing a blog about how we are dealing with a current challenge (teething, managing two toddlers) and hearing from others, “We are dealing with the same thing! Have you tried… x, y, and z?” It is great to know that you are not alone and how others are making it work.

Were you surprised to find out you were pregnant with twins?

Yes! My OBGyn did a first trimester ultrasound. We saw two little “circles”– two!– and we just stared at the image. My OB says, “You are having twins!” My husband and I thought it was the greatest thing. We were so excited. I showed everyone at the OBGyn my ultrasound as we were leaving, everyone in the waiting room, the guy in the lab, the front desk… As soon as we got to the car, we started calling our families. In between phone calls, it dawned on us what this meant: we needed a new car, we needed to move to a bigger place that wasn’t on the third floor, we needed a double stroller, car seats, cribs… The list kept getting longer! We felt very blessed that we were having twins. Still, we had many conversations along the lines of, “How are we going to do this?”

We had just moved to North Carolina when I became pregnant with twins, meaning we had no friends or family in the area. We had identical twins and there were many ultrasounds monitoring the growth of the boys. I took D to a lot of ultrasound appointments. Some of them were over 45 minutes long. There was one ultrasound tech who was always impatient with a two-year old wiggling in the chair next to me. That was hard. I tried to make it as fun as possible for him with toys and pointing out his brothers. Around the third trimester I discovered drop-in childcare, which made things a lot easier. He did great when the babies came home. I think most of our “problems,” such as competing for attention or feeling left out, started when the babies became more mobile. Then they would attack his toys and many of his toys with small parts, like his Playmobile pirate ships, no longer could be played with places that his brothers could get to them. It is really hard because having two mobile babies is very demanding! When I’m stopping one from emptying out the cupboard, the other is emptying out my desk drawers. I think those are the times that are the hardest for him because he wants me to sit down and cut out shapes with him. I try to keep all the boys involved during the day; we want to instill in them a sense of family instead of constantly feeling in competition with each other.

Having multiples is hard, but adding in the demands of being a military family is equally rough, what tips do you have for other military families out there?

When my first was born, my husband was on a fast attack submarine, very unpredictable schedule. With the program he is in now, the STA-21 “officer program,” he has just been going to college for the past two years, getting a mechanical engineering degree in under 3-years. Busy, but home every night. We move in about a year. In preparation for underways, I’ve been taking a lot of pictures and videos of the boys with their dad. My oldest loved his Daddy videos. So far, we only moved across town to a larger home with all three boys; it will be a whole different story when my husband gets back on a boat! The only thing I would say is to capture the family moments to make those special Daddy DVD’s and photobooks; they really mean a lot to the kids. However, I’m going to be the one needing tips from military families when we get back to boat life with a hoard of children!

What are some of your favorite things to do as a family?

The best thing about military life is that you really cherish family time. We love spending days at home. We put the sprinkler in the backyard in the evenings; the boys love that! My husband plays ball with the boys. They do golf, baseball, football, soccer, and roll the ball with the toddlers. I usually read while they run around in the yard. We also like going to the children’s museum or to the park. It’s not very exciting or glamorous, but we really enjoy spending time together.

If money was not an object, where would you vacation, and would you take the kids?

Disney, hands down! I grew up going to Disneyland. My husband wants to go to Disneywold. Even with money being no object, I’m not sure we could agree which park we should go to! We would definitely bring the kids. We love seeing their excited little faces when we take them somewhere new and fun. We are planning a Disney cruise as my husband’s “Happy Graduation” and commissioning present. We can’t stop talking about how much fun the kids are going to have or how our oldest will react when he gets to meet Mickey Mouse! Having kids is so much fun because you get to experience the world from their point of view.

What question, or questions, do you have for the other families in the community?

Ah… the toddler years. Getting two toddlers around is no small feat. How do other moms of twins manage two toddlers? I find that, often times, while I’m enforcing a lesson with one (“We do not throw toys at the dog”) the other is running wild (possibly throwing toys at the dog himself). I was very consistent with my oldest and feel that, now, with two, often times it just is not possible.

Danae of Our Little Women