One of the staples in feeding my family is pasta. My kids love pasta and since I feed them whole wheat pasta, I feel pretty good about making it for dinner just about every night of the week.

Now since it is a family favorite, I have gotten pretty good at coming up with a number of pasta casseroles. For a weeknight meal, there is nothing easier than boiling some water, cooking pasta, tossing it with a protein, veggies and a sauce and baking it in the oven.

So for the recipe this month, I would like to share just such a recipe. This is a big favorite here: Three Cheese Chicken Pasta. So grab your multiples and lets get started.

I have to stop here because this month, I had a little issue with getting my multiples in the kitchen. They were totally not interested and flat out refused to join me.

Why? Well, the siren song of couch jumping and rough housing was just too strong.

So, I was left to do the cooking on my own. Which I did and even though it was a bit calmer than when I little sous chefs are there, it was just not as much fun.

Here is the recipe for Three Cheese Chicken Pasta

And even though the kids didn’t help make this dinner, they attacked it just like they usually do. 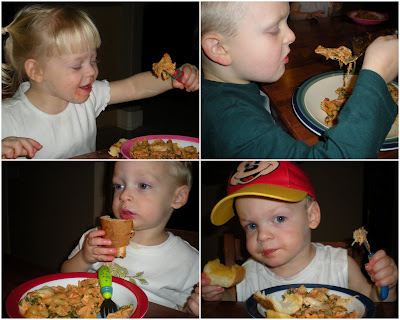 Breakfast in a Cup – Multiples in the Kitchen