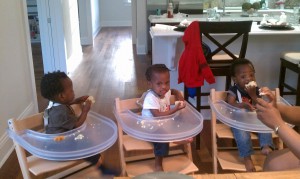 With all the talk about childhood obesity you would never know that there are parents out there who actually need to put weight on their kids and I am one of them.

This past winter my kids stopped gaining weight and started losing weight. They had one stomach virus after another. In fact they lost so much weight that they started wearing clothes that they had previously outgrown. These were some of the worst weeks of my life. Had it not been for the fact that they were developmentally on target in every other area, I would have been lying in a ditch somewhere.

It also didn’t help that two of my three kids were incredibly picky eaters and refused just about everything we gave them. Then three things happened to turn things around for us. One, the winter season passed and so did the stomach viruses. Two, my kids got older and became more interested in food. Three, a nutritionist provided us with a list high calorie foods which for the most part have been a hit with my kids. She suggested the following:

She also said some other ways top add calories to food is to add:

According to experts, kids need about 1000 calories a day to grow and she recommends 5-6 small meals a day. She also said skip most toddler snacks. They are low in calories and have almost no nutritional value. Read labels

Notoya Green is a New York City mom of three adorable triplet toddlers – Eva, David and Samuel (identical twins). In her blog she talks about her life as a new mom, life as a triplet mother and everything in between. Keep up with her over at Triplets in Tribeca.

Gen of The McNulty Quads

Michelle of Family Love in My City