I was unbelievably lucky to attend an advanced screening of Pirates of the Caribbean: On Stranger Tides. Here’s the description of the movie:

Produced by Jerry Bruckheimer and directed by Rob Marshall, “Pirates of the Caribbean : On Stranger Tides” captures the fun, adventure and humor that ignited the hit franchise—this time in Disney Digital 3D™. Johnny Depp returns to his iconic role of Captain Jack Sparrow in an action-packed adventure. Crossing paths with the enigmatic Angelica (Penélope Cruz), he’s not sure if it’s love—or if she’s a ruthless con artist who’s using him to find the fabled Fountain of Youth. When she forces him aboard the “Queen Anne’s Revenge,” the ship of the legendary pirate Blackbeard (Ian McShane), Jack finds himself on an unexpected adventure in which he doesn’t know whom to fear more: Blackbeard or Angelica, with whom he shares a mysterious past. The international cast includes franchise vets Geoffrey Rush as the vengeful Captain Hector Barbossa and Kevin R. McNally as Captain Jack’s longtime comrade Joshamee Gibbs, plus Sam Claflin as a stalwart missionary and Astrid Bergès-Frisbey as a mysterious mermaid. 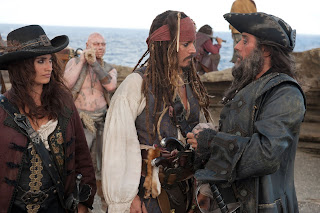 I’ve seen the other three Pirates films and honestly was worried about this one not having the majority of the same characters (namely hunk-a-licious Orlando Bloom) in it, but it was perfect. Johnny Depp is amazing as Captain Jack Sparrow, and is even better in 3D. The film has plenty of laughs and enough action to keep you on the edge of your seat. As a fair warning, the mermaids are somewhat scary and may frighten younger kids or a 28 year old woman who may or may not be me. *Ahem* Where was I? Oh yes, 3D…it is worth the $3 up-charge to see this film in 3D. You seriously feel like you are on Blackbeard’s ship and that you are in the jungles searching for the Fountain of Youth. I’m going to stop there because I don’t want to spoil any of the movie for you, but trust me when I say it’s awesome!

The film opens today and is honestly the perfect way to kick off the summer. Thank you to my wonderful friends at Disney Studios and Moroch for allowing me to see the film early!

Are you planning on seeing this? And, after you see it, leave a comment and let me know what you thought of it!

The Secrets to Healthy Kids

The Adventures of Chuck & Friends: Friends to the Finish