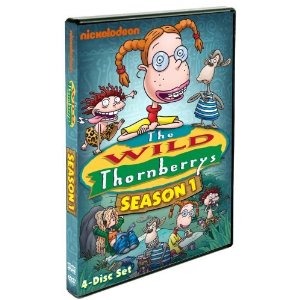 The Wild Thornberrys premiered in September 1998 and aired until 2004 with reruns airing on Nicktoons and CBS from 2002-2007. The Wild Thornberrys DVD release has long been anticipated by fans but has not been available in stores until now.The hit series follows the Thornberry family as they travel the world in their Communications Vehicle (or CommVee) looking for rare animals to film.After an encounter with an African shaman, their youngest child Eliza was given the power to speak to animals! Every episode in this adventure-packed DVD set follows Eliza as she comes face-to-face with an assortment of animals, continents and danger. Encounter wildlife in all its natural glory and eavesdrop on Eliza’s conversations with silverback gorillas, pythons, crested grebes, tapirs, capybaras, antelopes and opossums while the CommVee travels on!

Vibrant animation, exotic locations, charming storytelling plus an all-star voice cast, including Lacey Chabert (Party Of Five), Tim Curry (The Adventures Of Jimmy Neutron: Boy Genius) and Flea (The Red Hot Chili Peppers) make season one of The Wild Thornberrys an epic family adventure.  Featuring all 20 action-packed episodes, the collectible 4-DVD box set is priced to own at a suggested retail price of $29.93 and will no doubt attract a new audience of kids as well as young adults who grew up watching the television series.

The release of these DVDs is part of Nickelodeon’s commitment to bring back classic shows.  Nickelodeon will also launch a new nighttime programming block this fall on TeenNick called “The ‘90s Are All That!,” featuring a rotating selection of iconic live-action and animated shows from Nickelodeon’s 1990s.

I grew up on this show with my niece and was so excited when I saw that this show, as well as many of the others from Nicktoons were coming to DVD. I love all of the animal interaction and different locales that they visit (Brazil, the Galapagos Islands, and Tanzania).  My kiddos are starting to enjoy this series as well, but I do think it would be enjoyed more by older children and/or adults.

The Wild Thornberry’s is now available in stores and there are also additional volumes already available.

Libra Child: Traits and How To Deal with Them

ABCMouse.com Review: Is It Worth the Investment?