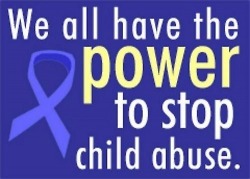 Sex abuse is not an easy topic to discuss, and trust me it is not an easy topic to write about. I’ve started, deleted and restarted this article more times than I care to admit, but it is something that needs to be discussed. With all of the attention Penn State, and now Syracuse, is getting it is even more relevant than before. You cannot turn on the television, or open a website, without being inundated with information about the cases.  It begs the question, were there signs that people missed? What should you as a parent being looking for in a situation like this? I was able to talk to Dawn Billings, a licensed mental health therapist who specializes in the treatment of adults and juveniles who sexually offend, and Harley T. Hall, a 12 year law enforcement veteran who is currently a Detective with the Orange County Sheriff’s Office (FL) Sex Crimes Unit.  They have provided invaluable insight on the topic.

The most common mistake we make as parents is strictly teaching our kids about “stranger danger”.  Only 10% of sex crimes against children are committed by people they do not know, the other 90% % are committed by people who have a relationship with that child and their family like family members, coaches, teachers, best friends- to name a few. Ms. Billings suggests talking to you children about their bodies and what your body parts are named, vagina and penis, not cutsey names but their correct anatomical name so that they know they belong to them. She also suggests teaching them who can touch them and where and what an appropriate touch is as well as that they should tell you anytime someone tries to touch them other than what you have discussed. “98% of my clients have reported that if their victim said “STOP”, “NO”, “I’m going to tell” that they would have stopped. They also report that their victim made a “good victim” because they were passive and did not argue or resist.” I cannot tell you how shocking that quote from Ms. Billings was.  This further stresses how important it is to empower our children to respect their bodies and know what is and is not appropriate when it comes to our bodies and social interactions with others. As a side note, Detective Hall does warn that you should not make this a common conversation. “Do not ask your child if they are being abused unless they are disclosing it to you. Young children, when asked the same question over and over again, will often change their answer because they feel they are giving the “wrong” answer and will change it so you stop asking. Simply going over it once, in a setting where you have their full attention (T.V. off, no one else around) is usually enough.”

Now what if you suspect there is abuse occurring? I asked both Detective Hall and Ms. Billings if there were any tell tale signs if your child is being abused, both agreed that there are no definite signs, but here is a list of some common things to be on the look out for:

* Your child withdraws from family, friends, or his/her usual activities.

* Your child starts to act more infantile or suddenly appears to be regressing.

* Your child suddenly develops fears and phobias of things he/she has always been used to.

* Your child suddenly shows reluctance to be left alone or to go somewhere with a particular person.

* You notice a sudden change in your child’s hygiene habits.

* You or the teacher recognizes a significant change in your child’s school performance.

* Your child suddenly starts displaying sexual knowledge that is inappropriate for one his/her age through words, actions, or in play.

* Physical signs or complaints that indicate you should bring to them to the attention of your Pediatrician and/or seek other medical attention even if only as a safeguard.

* You notice your child mirroring adult sexual behavior, persistent sexual touching and feeling of their bodies, with other children or toys.

* Your child complains of sore or swollen genital areas.

* Your child complains of unexplainable pain during urination or bowel movements.

* Watch for “grooming” such as showering of gifts on a child by an adult, or an adult spending an inordinate amount of time with a child that they don’t have an obvious reason to be spending time with.

According to Detective Hall, “Simply put, that little voice in your head? The little hairs in the back of your neck? Listen to them. If you think that someone is showing too much of an interest, limit their contact with your child and monitor very closely.” Ms. Billings echoed this sentiment saying, “If you have a gut feeling TRUST it. Sadly many people are saying after the fact “I couldn’t put my finger on it but I was just uncomfortable when I saw the way he looked at his step-daughter” if someone would have said something maybe it could have stopped or even prevented a victim of sexual abuse.”

Ms. Billings also mentioned that, “It is very common for a child to wait or never tell of the sexual abuse. This is a complicated issue. The child feels shame and guilt and most times still genuinely cares for their abuser as twisted as that may appear. The child at the time of reporting that they are a victim often times does not want to upset their parents and other children who may be associated with them or the perpetrator. They take on the huge burden of keeping this secret and attempting to maintain some type of normalcy in their lives for the sake of their own perceived sanity. Often times they blame themselves and feel that they did something to cause this.” Detective Hall expanded on this saying, “Offenders often tell their victims to “keep it a secret” or threaten the victims that it will be the victims who get in trouble if the abuse is disclosed; addressing these potential ploys ahead of time by telling your child that there are no secrets when it comes to this and they would never get in trouble.” Because of this it can often be hard to confirm if your child is being abused, that is why it is so important to be able to have an open dialogue with your children.

If your child does come to you and tell you that they are being abused it is extremely important to contact the authorities and not try to take matters into your own hands. According to Detective Hall, “It is of extreme importance, and this goes against every protective fiber in a parent’s being, to NOT INFORM the suspect of the allegations or CONFRONT them about the allegations. Allowing law enforcement to conduct an investigation without the suspect’s knowledge allows us to use a few more tools in our tool box and keeps a suspect from circling the wagons.” However, as previously mentioned, it may take years before a child comes forward to tell you about the abuse. I asked Detective Hall what the main differences were in how a case is handled if the abuse is brought to your attention now, or years from now:

“There are, generally, a few investigative differences between an immediate report, and a report that is delayed (for whatever reason). The most noticeable difference is the completion of a medical exam and the (possible) collection of physical evidence. For the most part, the decision as to whether or not a medical exam is completed is a decision reached by medical authorities along with input from Law Enforcement, so there is no steadfast rule as to when they do or do not occur. If a 20 year old victim discloses abuse that happened when they were 12, a medical exam would probably not be conducted due to both time lapse and the likelihood that the now 20 year old has had consensual sex. Likewise, if a 14 year old victim discloses abuse they suffered when they were 12, an exam would probably be conducted. One absolute involves what are called “acute” cases where the abuse is disclosed immediately, or within a few days (the standard used in my agency is up to 72 hours, which maybe extended to 120 hours). These types of acute cases often allow for the collection of DNA evidence or detection of physical injury, both of which are critical for the prosecution of sex abuse cases.”
Ms. Billings also stressed the importance of contacting law enforcement immediately and at that point they will put you in contact with a Child Protective Service Team and they will conduct assessments both medical and psychological. They will refer the victim and the family to the appropriate support services from that point.
Nobody wants to think about this topic but it is so important to start the discussion with your children to help prevent sexual abuse against children. Thank you again to Ms. Billings and Detective Hall for being a part of this discussion.  For more information on this topic visit the Child Welfare Information Gateway.

Have you had the talk with your kids yet? When are you planning on starting the discussion?

Dinner Strategies for Parents of Multiples

Barbara of My Sweet Life (with Two Twinkies and a Cupcake)