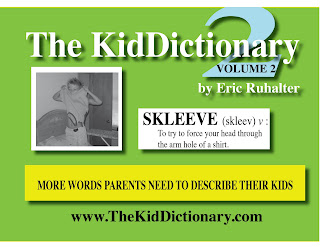 Oddly enough there are no words to describe a great many of the situations and ideas that pertain to living your life in the company of children. So parents are forced to give long drawn out descriptions of the circumstances they encounter in order to explain that which is going on in their midst. And who has less time for this than a parent? I’ll tell you who – A parent of multiples. Because moms (and dads) of multiples are often the busiest moms (and dads) of all.

With that in mind, The KidDictionary set out to make up and share with you these brand new words designed to describe the predicaments a parent is exposed to when they have a set of multiples in their brood.

TWINSOMNIA (twin-SAHM-nee-uh) n.:: The lack of sleep a mom of multiples experiences when her kids sleeping schedules fall out of synch.

STAYDATE (STAY-dayt) n.: The luxury/burden of always having a built in friend for your multiples to play/fight with any time they’re home together.

TWINGUISTICS (twin-GWISS-tiks) n.: The unique language that baby multiples use to communicate with one another that is completely indecipherable by anyone else.

DUMBASK (DUMM-ask) n.; A person who asks if your Twins who are a boy and a girl are “identical.”

TWINTERFERENCE (twin-tehr-FEER-entz) n.: When one multiple distracts the parent while the other pulls a fast one

TROUBLESUM (TRUBB-uhl-sum) adj.: The increased amount of trouble that can be found when multiple children work together to find it.

COORDTWINATE (co-ORD-twin-ayt) v.: To dress your multiples in matching outfits.

TWINIQUITY (twin-ICK-witt-ee) n.: The fundamental unfairness inherent in having multiples, due to the fact that you have to take care of more than one baby after only getting to have sex once.

MULTIPLOY (MULL-tuh-ploy) v.: When Multiples band together and deviously conspire against their parents.

MASSTONISHMENT (mass-TOHN-ish-ment) n.: The shock of suddenly being substantially out numbered by your children when you add a set of multiples to your household

Hopefully by incorporating these new words into our vocabularies we might make some baby steps towards easing our multiple burden. Whoever said “there’s safety in numbers” wasn’t talking about a mom being safe because she had a great number of kids. Good luck to all you Multi-moms and dads.

Eric Ruhalter is the author of the book series: The KidDictionary: Words Parents Need To Describe Their Kids. To learn more, watch the funny videos at www.TheKidDictionary.com